Levente Závodszky, researcher and publisher of the sources of law articles and synodal decisions in the age of St. Stephen, St. Ladislaus and Coloman

The study presents the framework and the possibilities of historians in the first half of the 20th century through the career of Levente Závodszky, who emerged from the vivid university education in the turn of the 19th and 20th centuries, which regarded source research as evidence and also preferred it, with a history-Latin studies degree, and then undertook the analytical processing of medieval and early modern documents. Almost 120 years ago, Závodszky edited the law articles and synodal decisions of St. Stephen, St. Ladislaus and Coloman and their sources in a way that scholars still use today. His prolific publishing activity and impulse waned after 1914, clearly linked to the historical events of the period. After the First World War, he concentrated on the field of education, making his mark in the field of public education, teacher training as well as in textbook writing. It is symbolic that he died in 1938, the “year of St Stephen”, the 900th anniversary of the death of the state founder, at the age of 57 in Pécs, as head of the school district. His career, his many and varied activities as a historian, and his outstanding project, the publication of the law articles, justify commemorating him in the pages of this yearbook. 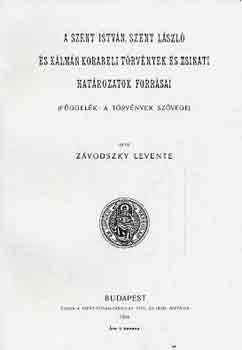