The Road of the Hungarian Golden Bull to Historical Mythology

The study focuses on the first steps of the road that lead the Golden Bull, issued by King Andrew II (1205–1235) in 1222, to the world of national myths. The Golden Bull was drafted primarily in order to solve an actual political crisis, yet it was understood in modern history as the strongest bulwark of a “thousand years-old Hungarian constitutionalism”. The memory of the Golden Bull did not fade after the death of King Andrew II. This study, based on an example from the 14th century, illustrates how the provisions were incorporated into the legal practice of the Middle Ages. As early as 1318 the Golden Bull was conceived as a general privilege, that was meant to regulate the basic questions of the relations between the monarch and his subjects. This perception was corroborated by King Louis I (1342–1382) in 1351, when he inserted the text of the Golden Bull in his own laws. The interpretation of the Golden Bull changed decisively in the modern era. Thanks to the collection of medieval Hungarian customary laws by István Werbőczy, the so-called Tripartitum, the notion spread that the nobility had the right to call the ruler to account in case of any grievance they suffered, a claim based precisely on the Golden Bull. 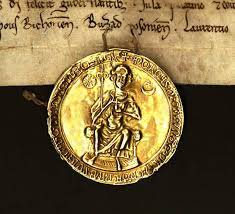